The fact of the matter is, there exist misconceptions as well as untruths when it comes to the sensitive subject of credit repair. Many people are under the illusion that repairing credit is a simple process while others believe that their low credit score status will haunt them for a lifetime irrespective of all the efforts they make to improve the score.

Well, in order to be clear about everything, we are going to bust a few myths of credit repair with the hope that you learn something and make an informed decision. Unfortunately, many people believe these myths that have been bandied around since time immemorial and by so doing have been victims of their own ignorance. So what exactly as the common myths about credit repair? What are the truths?

This is a misconception and a myth which if followed leads to serious ramifications. Opening new credit card accounts is not proof that you can handle credit. In any case, it raises a red flag and a lender will most likely ask why for heaven’s sake you need all that credit. If any, lenders will most likely you brand you a high-risk borrower which in essence works against you. The more new credit card accounts you open, the more enquiries on your credit report which in essence has a negative impact. 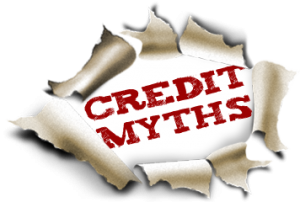 Myth #2: Closure of all accounts will inadvertently improve a person’s credit score

While you might think that closure of old accounts is a good strategy, the truth of the matter is that it could somehow hurt your score. When you close old accounts, your credit history is shortened which essentially means that lenders will probably see you as a new entrant. Lenders see individuals with a long credit history as seasoned borrowers and are more likely to approve an application for a loan from such individuals as compared to those with a short credit history.

Myth #3: Negative listings such as foreclosures or bankruptcies are impossible to remove from a person’s credit report

The reality of the matter is that while foreclosures and bankruptcies are more difficult to remove or repair, the assumption that it is impossible to remove them is nothing short of a fallacy. The truth is that negative listings on a person’s credit report can be removed with the right approach. It simply takes a longer time to remove foreclosures and bankruptcies as compared to other negative listings.

Myth #4: It is easy to repair one’s own poor credit score as opposed to enlisting the services of a credit repair company

While a person can undertake to repair their own credit score, the assumption that it will be as successful as when done with a credit repair company is a fallacy. The truth of the matter is that credit repair companies are up to date with changes in the credit repair industry, have the resources as well as the networks to ensure that best practices are followed to repair your credit score. The belief therefore, that DIY is the best move is nothing more than an incorrect argument.